Despite increased interest in the cybersecurity field, the gender gap persists. Women are still highly underrepresented among its ranks, while the majority of jobs are being filled primarily by men. The future of cybersecurity is influenced by its ability to attract, retain and promote more cyber professionals including more women. We need an interdisciplinary approach to reach high level of cybersecurity.

To celebrate the International Women's Day 2021, this CONNECT University session brought together leading women in cybersecurity to address some of the most contemporary pressing issues, share their successful stories, and inspire other women who want to pursue a professional career in this field. In the same time, the event discussed concrete actions to attract more women in this domain, highlighting the crucial role that they play in cybersecurity. 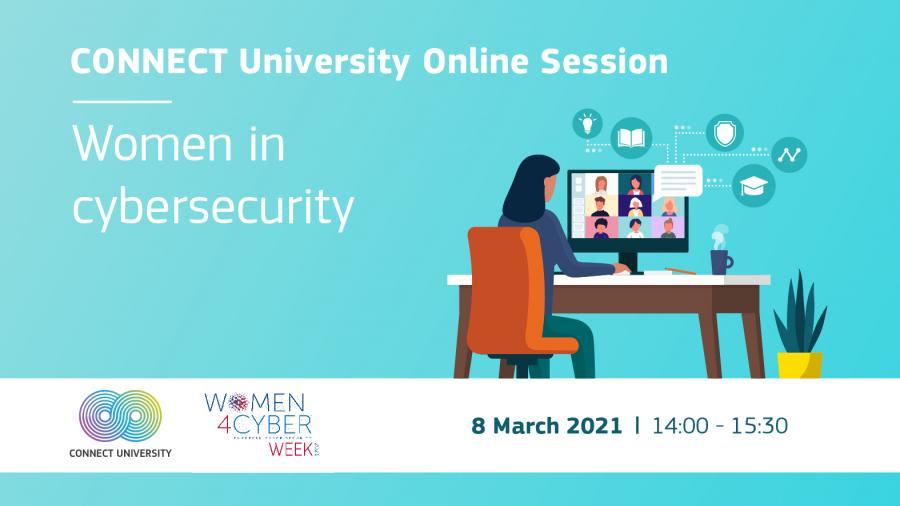 Lorena Boix Alonso is Director for Digital Society, Trust and Cybersecurity in Directorate General for Communications Networks Content and Technology (DG CONNECT), at the European Commission. Formerly, she was Acting Director for Policy Strategy and Outreach and Head of Unit for Policy Implementation and Planning, also in DG CONNECT.

She joined the European Commission Directorate-General for Competition in 2003. Prior to that, she has worked for Judge Rafael García Valdecasas, at the European Court of Justice, as well as Deputy Director and Legal Coordinator of the IPR-Helpdesk Project and in private practice in Brussels.

Despina Spanou is the Head of the Cabinet of the Vice-President of the European Commission overseeing the European Union’s policies on security, migration and asylum, health, skills, education, culture and sports.

Previously, she was Director for Digital Society, Trust and Cybersecurity at the Directorate-General for Communications Network, Content and Technology (DG CONNECT) of the European Commission. In this capacity, Ms Spanou was responsible for the European Union’s cybersecurity policy and law, digital privacy, connected cities and mobility, digital health, eGovernment and electronic identification. As Director for Digital Society, Trust and Cybersecurity, she was also responsible for the implementation of the EU legislation on security of network and information systems (NIS Directive) and for the negotiations of the EU Cybersecurity Act. Ms Spanou has served as a member of the management board of ENISA, the EU agency for cybersecurity, and of the Steering Board of the Computer Emergency Response Team for the EU Institutions, bodies and agencies (CERT-EU). She is a founding member of the Women4Cyber initiative and advocate for the need for more cybersecurity experts in Europe.

Despina Spanou has also been Director for Consumer Affairs at the Directorate-General for Justice and Consumers (2013-2017) in charge of consumer policy, consumer and marketing law, redress and enforcement, and product safety. Prior to this position, she was Principal Adviser in the Directorate-General for Health and Consumers responsible for communication and strategies on managing chronic diseases including the EU's contribution to the UN General Assembly on Health.

She was the Deputy Head of Cabinet for the European Commissioner for Health and Consumers Mr Kyprianou (2004-2008) and for the Commissioner for Health Ms Vassiliou (2008-2010). Despina Spanou started her career at the European Commission at the Directorate General for Competition (in 2003). She had previously practiced European law with the Brussels branch of a US law firm.  Despina Spanou is a member of the Athens Bar Association and holds a Ph.D. in European law from the University of Cambridge. She is Greek/Cypriot.

Mr Juhan Lepassaar took up his functions as the Executive Director of ENISA on 16 October 2019. He has more than 15 years of experience in working with and within the European Union. Prior to joining ENISA, he worked for six years in the European Commission, including as Head of Cabinet of Vice-President Andrus Ansip responsible for the Digital Single Market. In this capacity, he also led and coordinated the preparations and negotiations of the Cybersecurity Act.

Mr Lepassaar started his career in the EU affairs with the Estonian Government Office, leading for five years the national EU coordination system as the Director for EU affairs and EU adviser of the Prime Minister.

Anett Madi-Nator is the President at Women4Cyber Foundation, as well as Director of International Operations in Cyber Services Plc since July 2015. Previously, between April and June 2015, she was employed as a Senior Cyber Security Expert, International Relations in the Hungarian Ministry of Defence responsible for HUN MilCIRC Capability Development, MilCIRC Coordination Centre and International Relations. In that period, she was also a Board Member of RDCCD at University of Pannonia, Veszprém, Hungary. Between 2011 and March 2015, she was the Head of IT Awareness in the Hungarian National Security Authority (CDMA). She received her Master of Science (MSc) degree in English Language and Literature at Pécsi Tudományegyetem.

Selene Giupponi is the Council Member at Women4Cyber Foundation. She is currently Managing Director in Resecurity located in Los Angeles, California. She is also a freelancer Cyber Threat intelligence & Digital Forensics Consultant. Previously, between 2012 and 2018, she was employed in Security Brokers, company that she founded in Rome. She obtained her Bachelor of Engineering (B.E.) in Computer and Information Sciences in 2008 at Università degli Studi di Roma 'La Sapienza'. She also accomplished numerous widely recognised cybersecurity training.