Blockchain is a powerful tool that can serve to significantly improve the transparency, accountability and traceability of greenhouse gas emissions, supporting companies to provide more accurate, reliable, standardized, and readily available data on carbon emissions. Join this CONNECT University event and discover more about the way blockchain technologies can become a powerful enabler for our collective action to fight climate change. 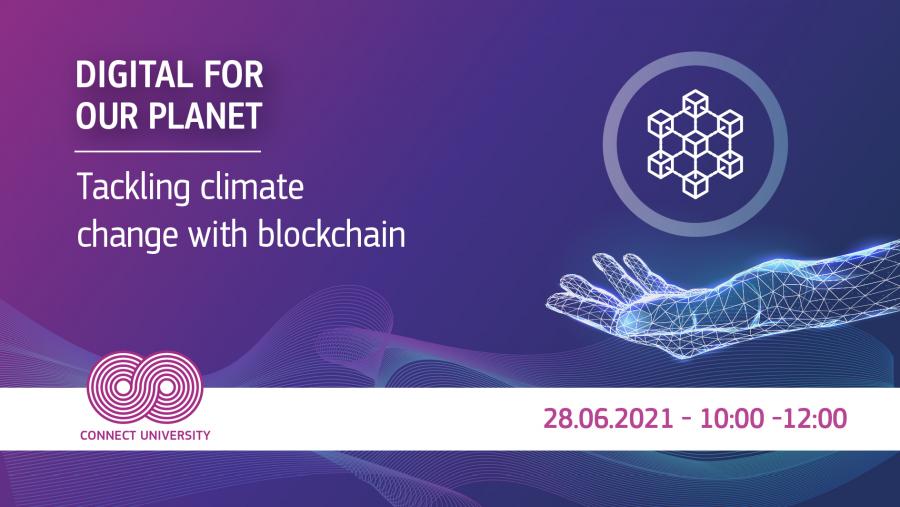 He joined the Commission 25 years ago. He is responsible for exploring the potential use of blockchain technologies to support EU Climate Policy development and implementation. He has 18 years climate policy working experience, out of which for 16 years he has been responsible for developing legislation  and technical implementation related to the Monitoring, Reporting and Verification (MRV) of GHG emissions, first in the EU ETS (2005-12) and then, until now, as member of the International Carbon Markets team. Responsible for ETS technical cooperation projects in China, South Korea, Tunisia, covering the East-Asia Region. Developed and implemented MRV legislation in the Maritime sector (2013-17). Responsible for development cooperation projects in Central West Africa in DG DEVCO and for eco-labelling in DG Environment.
Before joining the Commission in 1995 he developed 8 years working experience on environmental policy in the private sector, first as consultant (London) then as executive in charge of environment business strategies for a multinational company and later for the Italian chemical industry trade association.

Title of the presentation: Mapping the Opportunities and Challenges of Leveraging Blockchain and Integrated Technology for Climate Change: Bridging a Fragmented Solution Space

Katherine is the Community Director of the Open Earth Foundation (USA), the newly appointed Fellow of the Social Alpha Foundation and a lead consultant on the United Nation's Dialogue on Digital Currency and BigFintechs Impacts on Sustainable Development. She is also a member of the Consultative Working Group of the Financial Innovation Standing Committee  of the European Securities and Market Authority (ESMA-CWG-FISC). A former Canadian Diplomat - specializing in Human Security and Climate-Change - she has been spearheading innovation at the nexus of technology, policy, finance, climate change and sustainable development for over 25 years. Katherine has held leadership roles with the EU Climate-KIC and the Green Digital Finance Alliance (the Ant Financial and UNEP Partnership) including as Sherpa to the United Nations Secretary General's Task Force on Digital Finance for the SDGs. Katherine has also served as a lecturer at several universities, as an advisor with the UNDP Accelerate2030, the Ashoka Changemaker Program, NESTA UK, the MIT IIC, and the EIT Food, and as an expert consultant on World Bank’s Blockchain Carbon Markets Pilot. In her role of Chief Strategy Officer for the award-winning Startup BLOC she led the team to the 2018 MIT Solve Fellowship. Katherine is also an author of several reports and book chapters, a globally recognized facilitator and speaker on strategic collaboration, systems innovation, and emerging tech for impact.

Title of the presentation: CircularChain: a concrete example of how blockchain supports the environmental transition

Antoine Le Feuvre is the CEO of 3C, the SUEZ Entity that aims at shaping a sustainable environment for citizens, consumers and companies through digital solutions such as CircularChain, the circular economy blockchain. The Group aspires to be the preferred partner of its customers, working together to restore and preserve core elements like water, air and soil with concrete actions and advanced technologies.

Before joining SUEZ, Le Feuvre served as Co-founder and VP Customer Services of Traveldoo, a leading-edge tech company focused on delivering value-added applications to simplify and optimize travel and expense management. Traveldoo has been the pioneer in Europe to develop SaaS models and use the technology to disrupt the travel industry and it was acquired in 2011 by US Global leader Expedia. Antoine continued to serve Traveldoo as COO and CCO until 2017 when he joined SUEZ R&R France (Entity dedicated to recycling and recovery), as Chief Digital Officer and member of the ExCom to create a new business line and lead digital transformation.

As an advocate for technology-enhanced and sustainable solutions, he applies his considerable energy to accelerate their deployment for a positive impact on the planet, combining his passion for digital with the one for the environment.

Title of the presentation: The Climate Ledger Initiative: use cases and governance for blockchain in climate action

After his studies in physics at the ETH Zurich (CH), he did his Doctoral thesis on climate change at the Paul Scherrer Institut and was a fellow at the Collegium Helveticum. After his PhD, he headed national and international projects in the areas energy, climate and environment. Furthermore, he worked as Senior Carbon Originator at the Swiss Re's Emission Desk in London (UK). He has extensive consultancy experience, advising industrial companies, energy producers, governments and financial institutions in Europe, Africa, Latin America, Southeast Asia, India and China.

From 2006 to 2012 he was a member of the CDM Executive Board's Methodological Panel of the UN Framework Convention UNFCCC.

Since 2017 he is part of the management team of the Climate Ledger Initiative (CLI): CLI is an international, multi-stakeholder initiative at the intersection of climate change and blockchain technology, or more generally distributed ledger technology (DLT). The mission of CLI is to accelerate climate action in line with the Paris Climate Agreement and the Sustainable Development Goals (SDGs) through blockchain-based innovation applicable to climate change mitigation, adaptation, and finance.

Title of the presentation: The role of blockchain in greening global value chains

CEO of Bloc (Blockchain Labs for Open Collaboration) and co-founder of BunkerTrace, Deanna MacDonald is a blockchain innovator. At the helm of Bloc, MacDonald has helped the company develop blockchain solutions for the maritime, energy and water sectors. Today, at just four years old, Bloc is the leading sustainability platform of its kind.

At BunkerTrace, which MacDonald co-founded in 2019, her goal was to use a combination of synthetic DNA and blockchain to bridge the gap between the digital and physical to enhance marine fuel traceability for environmental compliance, a goal which the company has achieved in just one year’s time. A respected public speaker and proponent of open-source technology, MacDonald uses her applied expertise in blockchain to educate industry, academia and policy makers on many aspects of the emerging field.