The CONNECT University kicked off its 2021 thematic summer school programme dedicated to Digital for our planet with a special introductory session on “A European perspective on the role of digital in accelerating the transition to a green economy”, exploring the way digitalisation can help sustainability and how digital innovation and solutions can contribute to tackle climate change. In this vein, through this event, participants had the chance of getting an in-depth understanding of the potential of digital technologies to help address the world’s most pressing climate concerns and enable the much-needed shift toward a circular economy.

Watch the recording and find out more on the Commission's efforts to assure that Europe will be the epicentre of green technology. 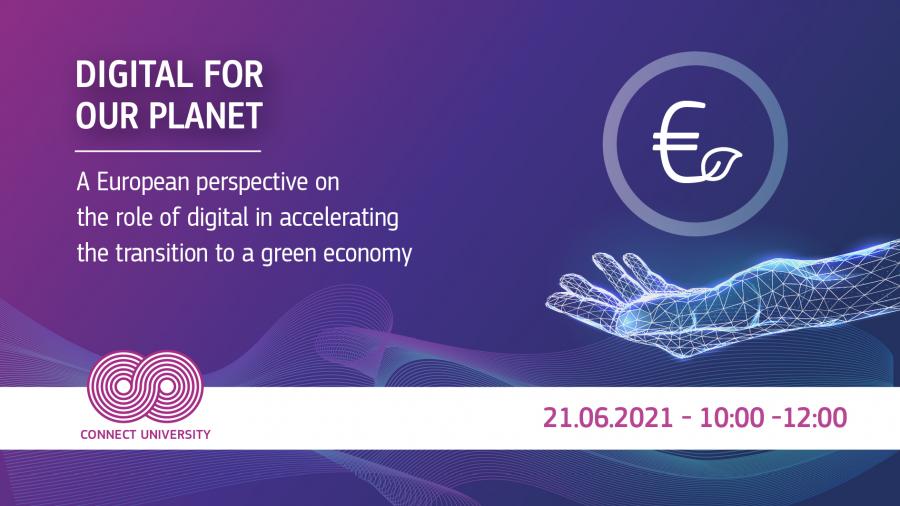 Ilias works on EU wide measures and initiatives that aim to improve the energy and material efficiency of ICT, e.g., making datacentres climate neutral and digital devices more circular. He is focused on maximising the benefits of green digital transformation for environment/climate, society and economy. Ilias is working on digitalisation for circular economy (e.g. digital product passport) and on the European Green Digital Coalition. He is fostering cooperation of relevant stakeholders to develop consistent and transparent methods to estimate the net impact of digital solutions on environment/climate, and, green digital transformation in sectors such as energy, transport, construction, agriculture and others. Before 2017, Ilias was working for over 20 years on eHealth and ICT for active and healthy ageing.

He held the position of Secretary General in charge of managing AGCOM, from 2005 to 2012. Prior to this, he served as Director of the Regulation Department and Technical Director in AGCOM from 1999 to 2004.

From 1985-1999 he served in various positions including Head of Telecommunication and Broadcasting Satellite Services at the European Space Agency (ESA).

Roberto Viola has a degree in Electronic Engineering and a Masters in Business Administration (MBA).

Dr. Florika Fink-Hooijer is the Director-General of the Environment Department of the European Commission. Having occupied various senior management positions in the European Commission, Florika is recognized for her strong management and leadership skills and her in-depth experience in EU policy making & shaping. A lawyer by training, Florika brings a proven record of accomplishment in foreign external and security policy as well as in humanitarian aid and disaster risk reduction. She has extensive experience in leading complex inter-institutional and intergovernmental negotiations.In her current role, she is responsible for implementing the European Green Deal objectives in particular the areas of Circular Economy, Biodiversity and Zero Pollution.

Mr Toni Tolker-Nielsen is of Danish nationality. He holds a degree in Mechanical Engineering from the Southern University of Denmark. He started his professional career in industry in 1983 developing evaporation and drying plants for APV ANHYDRO in Copenhagen. In 1984, Toni joined CERN in Geneva where he was responsible for the design of guidance systems for elementary particle beams. He joined ESA in 1987 in the Technical Directorate as a Mechanism Engineer, where he mainly worked on pointing and tracking systems for free space laser communication. In 2001, Toni completely changed his career path taking up duty as Head of the Industrial Monitoring Office, in the Directorate of Industrial Matters and Technology Programmes, in ESA HQ. He went on to join ESA’s Launcher Directorate in early 2003 and was responsible for the Return to Flight Programme of Ariane 5 ECA following the launch failure in December 2002. He became Head of the Ariane Development Project Division in 2005 and Head of the Ariane Programme in 2006. Toni implemented the profound reorganisation of the launcher sector decided at the Ministerial Council in May 2003, which took Ariane 5 from its infancy into successful exploitation with today more than 100 flights. In 2014, Toni took up the post as Inspector General of ESA with a mandate to guarantee consistent, affordable, technical excellence within the Agency. He became member of ESA’s Executive Board in 2015, contributing to the overall strategy and management of ESA and supporting the preparation of Ministerial Councils. He was appointed Head of the Earth Observations Projects Department in ESA ESTEC, in 2019, a post he ensures in parallel with his current role as Acting Director of Earth Observation Programmes and Head of the ESRIN establishment in Frascati, Rome.

Born in 1975, Mr Videmšek used to be employed by biggest Slovenian daily DELO, now free-lancer. His work was published in more than 100 international newspapers & magazines, including New York Times, Der Spiegel, Sydney Morning Herald, GEO, El Periodico, Le Figaro, Politico, Geographical. Winner of several international and national awards. Author of six books, including Dispatches from the Frontlines of Humanity and Plan B (book of the year in Slovenia). Author of two theatre plays. European Young Leader 2015. Ambassador of EU Climate Pact. He has re-focused his field work and research to climate crisis after 2016.