The Eurometropolis Lille-Tournai-Kortrijk brings together 157 French and Belgian municipalities, with a total of 2.1 million French and Dutch-speaking inhabitants. The Eurometropolis is also a European Grouping of Territorial Cooperation (EGTC) bringing together 14 French, Walloon and Flemish partners. All key drivers of the French and Belgian regions (such as politicians, institutional actors, public administrations, and civil society) are involved with the Eurometropolis, which acts as a hub for all cross-border information, activities and services. This allows for efficient and coherent cross-border cooperation, which in turn promotes integrated territorial development. In particular, during 2019 and 2020, its actions revolved around economic development and new technologies, work-linked learning, and sustainable development.

With an area of 3,500 km²-large, this bilingual region embraces the Lille metropolis, the southern and central parts of West Flanders, and western Hainaut. 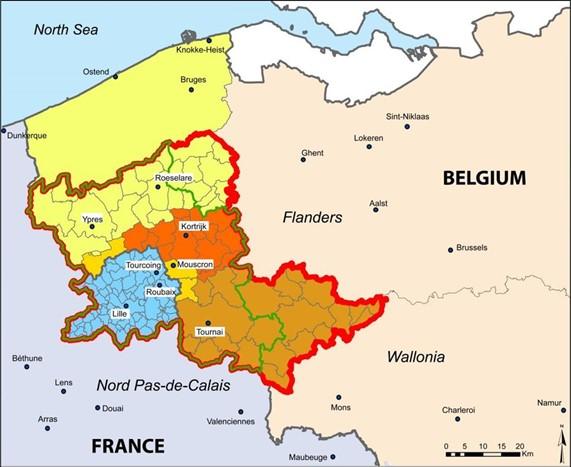 The EGTC brings together all French and Belgian government levels thanks to its founding partners: 2 countries, 3 regions, 2 provinces, and 1 department, as well as 5 intermunicipal associations. The establishment of the EGTC in 2008 has allowed cooperation to develop in a stable and sustained manner over the years. Six cooperation bodies were established within the EGTC: the Presidency, the Assembly, the Board, the Cross-Border Agency, the Thematic Working Groups and the Conference of Mayors and Burgomasters. In addition, in the 2016-2020 period the EGTC area was involved in different Interreg programmes (Interreg 2 Seas 2014-2020, Interreg France-Wallonie-Vlaanderen and Interreg North West Europe).

The EGTC since its establishment has provided great added value for the region. Among the most interesting accomplishments of this cooperation model, it is important to mention: