The European Grouping of Territorial Cooperation GO (EGTC GO) and the Integrated Territorial Investment (ITI), both funded by the Interreg V-A Italy-Slovenia Programme, paved the way for the implementation of integrated policies in the cross-border area comprised of Gorizia (Italy), Nova Goricaa (Slovenia) and Šempeter-Vrtojba (Slovenia).

An EGTC is a cross-border tool designed to overcome the difficulties encountered in territorial cooperation due to different legislation and procedures, and to facilitate the implementation of common activities.

The EGTC GO was created in 2011. Since its establishment, the EGTC GO has successfully executed cross-border projects and initiatives focusing on the improvement of common cross-border areas and the lives of local inhabitants. The strategic plan of the EGTC GO was adopted through a joint effort that involved citizens and experts in many fields such as transportation, energy, healthcare, culture and education, city planning and sport.

The strategic plan is based on three pillars:

In 2014, the representatives of the EGTC GO, members of the task force for the Interreg V-A Italy-Slovenia 2014-2020 Programme, proposed to combine the tools of the EGTC and ITI, adding value to the Programme. The combination of these two tools means that strategies can be translated into actions that exceed the administrative borders. 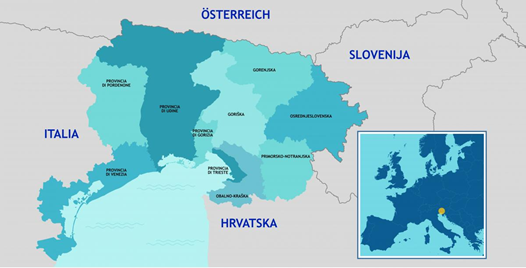 The EGTC, considered the most advanced form of cross-border territorial cooperation, shares goals relating to common management and modernisation in the health, environment and infrastructural sector, urban transport, logistics, energy and economic development initiatives. Within the Programme, the ITI constitutes a significant implementation tool for the area that makes up the municipalities of Gorizia, Nova Gorica and Šempeter-Vrtojba, with a total financial allocation of EUR 10.000.000 (ERDF contribution – 85% and national co-financing – 15%). The EGTC GO was assigned the role of intermediate authority and is responsible for the implementation of the ITI in the territory of the three municipalities. There are two pilot actions currently in place under the ITI: "Building a cross-border healthcare network” and "Isonzo-Soča cross-border nature park", with a financial allocation of EUR 10 million.

The "Building a cross-border healthcare network” project entails the establishment of joint cross-border medical teams in the field of mental health, autism and normal pregnancy, as well as the creation, on an experimental basis, of a single centre for cross-border reservations. Additionally, the project includes a pilot project for cross-border services and interventions related to the inclusion of vulnerable groups in the population.

The "Isonzo-Soča cross-border nature park" focuses on the conservation, protection, recovery and development of the natural and cultural heritage of the cross-border area along the Isonzo-Soča river, a 138-kilometre river originating in the Julian Alps in north-western Slovenia. The river is considered a shared heritage of Gorizia, Nova Gorica and Šempeter-Vrtojba.

In the years following its implementation, the combination of the EGTC and the ITI has proved to be an effective means to deliver policy in a territorially integrated and effective way.

The two cities of Gorizia and Nova Gorica have also won the title ‘European Capital of Culture 2025’, a project in which the EGTC GO will play a central role.