Urban Agenda for the EU

Below are the Action Plans of the Urban Agenda for the EU Partnerships.

What is an Action Plan?

According to the Pact of Amsterdam, each Partnership draws up an Action Plan in the course of its work, laying out its priorities, objectives, and steps to be taken in order to reach these.

Action Plans are made up of concrete proposals for Better Regulation, Better Funding and Better Knowledge, related to the theme of the Partnership. These proposals can be regarded as non-binding contributions to the design of future and the revision of existing EU legislation, instruments and initiatives. The coordinator(s) of each Partnership are responsible for coordinating the drafting of the Action Plan.

Once an Action Plan has been drafted, it undergoes a Public Feedback, which is open to everyone and available via the Futurium website. Ongoing consultations will be advertised on Futurium, on the Urban Agenda for the EU’s newsletter, and on social media.

Subsequently, the Directors-General  meeting on Urban Matters (DGUM), advised by the Urban Development Group (UDG), provides feedback on the Action Plans and non-binding guidance to the actions. 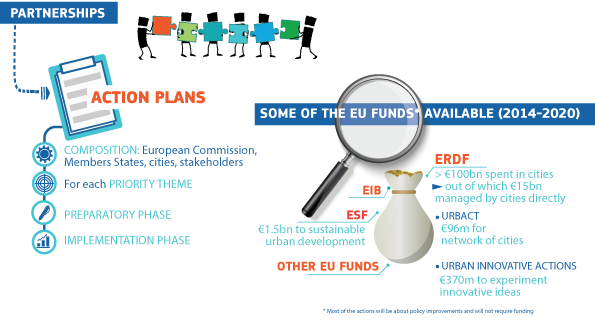