Coordinators’ & Action Leaders’ Meeting 2021: laying the groundwork for the future of the UAEU

The Coordinators’ & Action Leaders’ meeting 2021 took place on the 9 and 11 June, gathering the Coordinators and Action Leaders of all the Urban Agenda for the EU (UAEU) Partnerships, representatives of the European Commission and the Council Presidencies, and other key stakeholders. The two-day meeting was held in digital format and focused on how to capitalise on the work and achievements obtained over the last five years, and featured discussions on its future and renewal process.

Day 1: Capitalising on the Urban Agenda for the EU (Wednesday 9 June 2021)

The first day was opened by Thomas de Béthune and Laura Liger from the European Commission (Inclusive growth, Urban and Territorial Development unit, DG REGIO). They presented an overview of the state of play of the UAEU and the support provided to Partnerships. The importance of harnessing the achievements and results achieved by the UAEU was stressed, as we near the end of its five-year journey.The Coordinators’ & Action Leaders’ meeting 2021 took place on the 9 and 11 June, gathering the Coordinators and Action Leaders of all the Urban Agenda for the EU (UAEU) Partnerships, representatives of the European Commission and the Council Presidencies, and other key stakeholders. The two-day meeting was held in digital format and focused on how to capitalise on the work and achievements obtained over the last five years, and featured discussions on its future and renewal process. 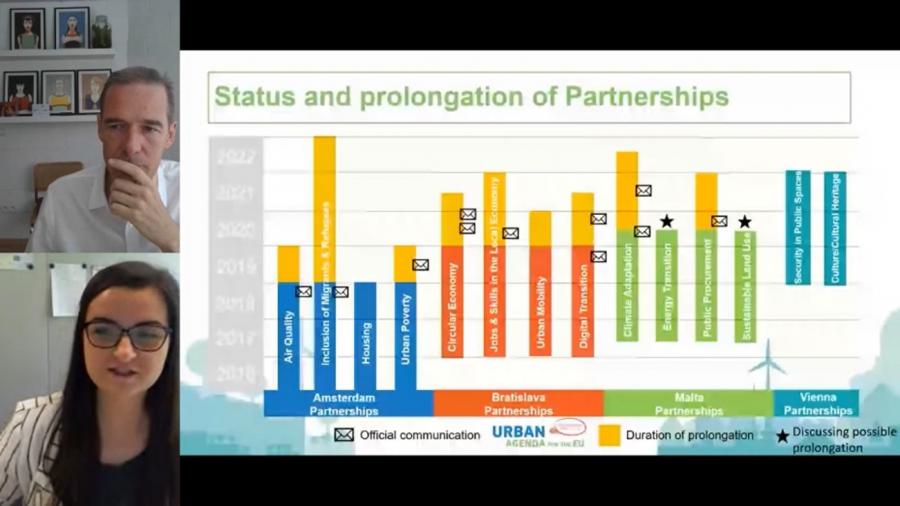 Afterwards, the Coordinators of the Vienna Partnerships took the floor to deliver important updates to participants. Since the same meeting last year, the Vienna Partnerships finalised their Action plans and are currently in the implementation phase. Coordinators Jan Schultheiß (Federal Ministry of the Interior, Building, and Community, Germany) and Sandra Gizdulich (Agency for Territorial Cohesion, Italy) from the Culture/Cultural Heritage Partnership announced that they are applying to become a Partner for the NewEuropean Bauhaus. The overall vision of the Partnership was presented, which led to the design of 11 Actions which are currently being implemented. Coordinators Sébastien Viano (Ville de Nice, France) and Eszter Karácsony (European Forum for Urban Security, France) from the Security in Public Spaces gave a presentation on the preliminary results and state of play of the Actions, and discussed the achievements and impact of the Partnership.

Next on the agenda, Karen Van Dantzig (Urban Envoy at the Kingdom of the Netherlands), and David Schutrups (Europa Decentraal, the Netherlands) presented the state of play of the Better Regulation Initiativeproposed to strengthen the Better Regulation strand for the post-2020 UAEU, is linkeing it in particular to  the ‘Fit for Future’ Platform. The first of four blocks that constitute this Initiative (a Quick Scan exercise) was delivered in May. The Quick Scan exercise resulted in 33 advice sheets with guidance for each Better Regulation Action so that Partners can follow-up on them through opportunities at EU level. 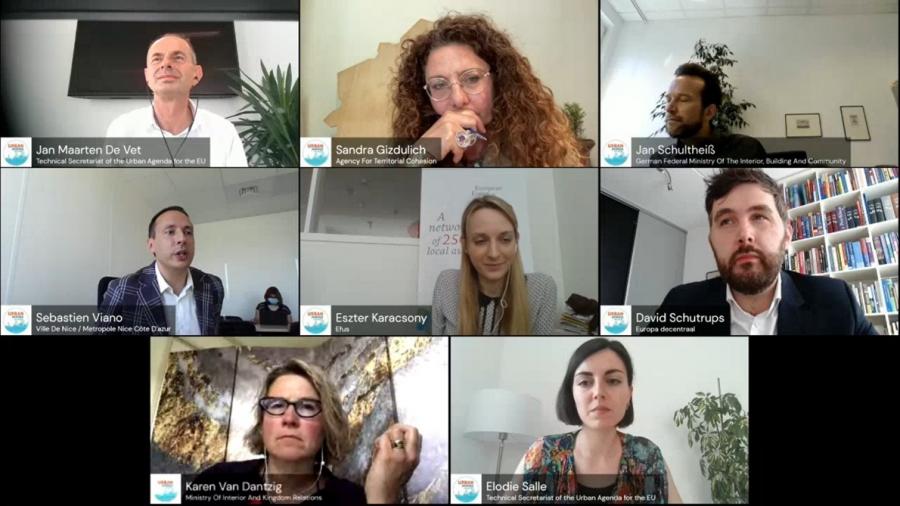 After a Q&A and a short break, Participants joined one of three parallel break-out sessions.  These sessions were based on Discussion Papers to facilitate dialogue on how to capitalise on the UAEU achievements, and the topics where “How to successfully run a Partnership”, “How to ensure sustainability and momentum of the Partnership”, and “How to create a tangible and lasting impact”. Each group was opened with a scene-setting presentation from a Coordinator. Common themes and takeaways could be observed from the discussions.

The first day was closed by Lamprini Lambropoulou from the European Commission (Inclusive growth, Urban and Territorial Development unit, DG REGIO), who reminded participants of the importance of taking stock of the achievements and exploring possibilities of capitalising on these achievements in the medium and long term. The importance of the role of cities in implementing strategies on a local, regional, national, and European level wasalso underlined.

The second day of events focused on the future and renewal process of the UAEU, with the intention of using the unique experience of the UAEU to contribute to it.

Fernando Rosa (DG for Territory, Portugal and Representative of the Portuguese Presidency) shared main updates on the eight Technical Preparatory Meetings that took place which focused on technical work and discussions on the future of the UAEU. These meetings resulted in various working documents which were used as the basis for the four Input Papers used later in the day during the breakout sessions. The topics are UAEU Governance, UAEU Priority themes and delivery modes, UAEU Implementation and support to policy development, and UAEU External coherence, alignment and linkages.

Aša Rogelj (Ministry of the Environment and Spatial Planning of the Republic of Slovenia) , took the floor next. She highlighted the importance of the UAEU in achieving coherence for urban development in Europe and how the Slovenian Presidency intends to continue to support the implementation and communication activities in relation to the Territorial Agenda 2030.

Participants again broke into smaller groups to discuss the four Input Papers developed by the Portuguese Presidency and brainstorm on the future of the UAEU and its renewal process, and conclusions were shared in the plenary.

Thomas de Bethune from the European Commission (DG REGIO, unit 03, Inclusive growth, Urban and Territorial Development) provided closing words for the event as a whole, stating that the suggestions and discussions which took place during this two-day meeting will provide valuable input for the shaping of the future Urban Agenda for the EU, and the drafting of the Ljubljana Agreement which will help frame the next steps, in which cities will be at the forefront. For the future of the UAEU, interested Partners would be advised to engage in discussions with their Member States as well as with city organisations such as Eurocities, the Council of European Municipalities and Regions, as well as with the Committee of the Regions, which will take active roles in these discussions.

Furthermore, he highlighted that there was a unanimous feeling that a sense of responsibility and trust is required between Partners and members of UAEU governing bodies to move things forward. Active participation is essential. Coordinators have a role to play in offering stamina and trust in Partnerships and the UAEU governing bodies should have the same role for wider support in the implementation of the Actions.

The representative of DG REGIO rounded up by saying that the messages of the participants were heard and invited them to provide input for the series of webinars, to be held in late September/early October 2021, entitled ‘How are urban initiatives and actions supporting Green, Just and Productive Cities in the EU?’ Find out more and register here!