The 11th meeting of the Housing Partnership took place in Luxembourg early June 2018. Members had the chance to meet with two Ministers, as Francois Bausch, Minister for Sustainable Development and Infrastructure of Luxemburg, welcomed the group at the opening of the meeting, and Marc Hansen, Luxemburg´s Minister for Housing, addressed the meeting in the closing session. Mr Bausch spoke about the rapidly growing population in Luxemburg and the challenges of providing adequate levels of affordable housing that can meet that need. Mr Hansen showed great appreciation in the work of the partnership and informed members about the situation in Luxemburg as well. 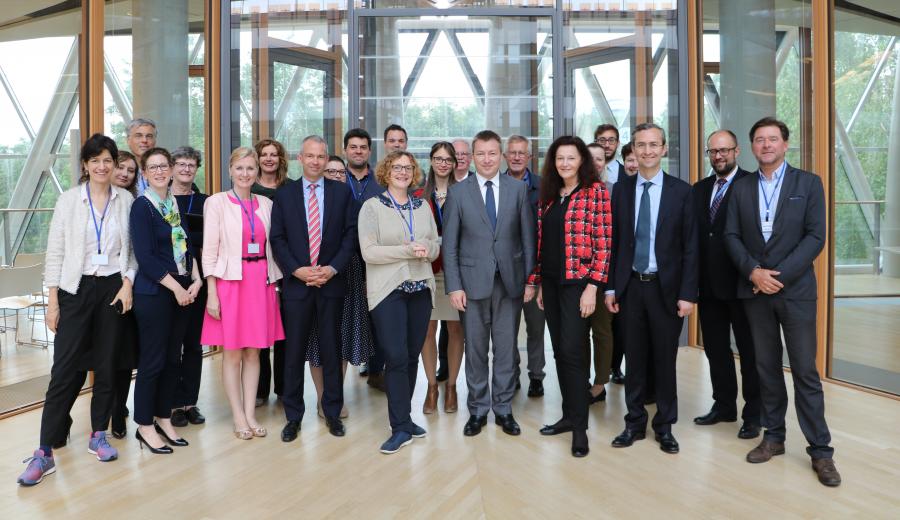 EU cohesion policy and EIB financing instruments in the focus

A recent mid-term analysis of Housing Europe on the impact of structural funds on housing 2014-2020 showed that €6.6 billion EUR have been spent on housing projects to date including €1.35 billion for housing infrastructure projects. Barriers faced by housing providers in accessing EU funding are lack of skills, information barriers or capacity to absorb. The report identified nine specific policy recommendations, which the members of the partnership endorsed.

Between 2011 and 2017 EIB has invested €9.5bn in social and affordable housing in 18 EU Members States. It was emphasised that the EIB invests in countries where there is a clear regulatory and policy framework for affordable housing, therefore, there has been very little investment in Eastern European due to a lack of clear frameworks for social and affordable housing. It was also outlined that the EIB’s approach was to work with financial intermediators and aggregates. However the EIB does make direct loans to some larger housing associations. EIB sees its role also in helping countries to set up aggregators that provide financial support to housing associations. Last, but not least, the support available from the EIB through the European Advisory Hub – the URBIS initiative was presented, which provides technical and financial advice for investment projects.

Discussion on the role of affordable housing in the European Semester

Members of the partnership also discussed how to improve the European Semester procedure to better reflect diverse affordable housing tenures, fragmentation of the housing markets and housing need and support better financing conditions for affordable housing. There was agreement in the group that the focus on the economic aspects of housing should be balanced by an equal concern with the social impact of housing in line with the Pillar of Social Rights. Participants took note of a briefing paper on how the different country reports in the European Semester reflected housing issues. It was agreed that while the social scoreboard is seen as good step, social housing is currently not addressed by its indicators. There was agreement that it is important to follow up on how social and affordable housing can be addressed in the social scoreboard.

In this context, housing partnership also continued reflections on housing affordability on the basis of a reflection paper. It was argued that affordability is a relationship between housing and people. Affordable housing must be of an acceptable standard, for example meeting overcrowding standards and having adequate facilities.

Insight into interesting local and national housing solutions in Luxemburg

Participants had the chance to explore three interesting approaches to provide affordable housing for Luxemburg´s growing housing needs. The “Fonds du Logement’s” is the leading public provider of affordable housing, focusing on properties to rent and sell for people on low and moderately low incomes. It is a national agency created by law and subsidised by the housing ministry. Specific achievements include: a focus on the creation of new neighbourhoods including the provision of shops in ground floor units and space for start-up businesses; high environmental standards; larger national affordable housing projects on former industrial sites; renovation of old buildings. Families with incomes of up to €60,000 are eligible for affordable housing. “Société Nationale des Habitations à Bon Marché” is a property developer which is owned by public sector shareholders. It focuses on the provision of properties for sale at reasonable prices. Properties are sold on the open market but with strict conditions e.g. buyers must not already own a property in Luxembourg or abroad and the properties must not be rented out. The properties are also mainly dedicated to families and couples where there is an identified need for affordable homes. The “Agence Immobilière Sociale” converts vacant private dwellings in to social housing. They target elderly people who are moving out into specialist accommodation for the elderly where their homes would otherwise stay empty. The contract with the property owners is based on a guaranteed rent and tax exemption in rent. The agency undertakes basic renovation work on the property such as decoration and insulation. Service is free for owner and tenant, rent is set at one-third of net monthly income. The provider also enters into a social contract with the tenants e.g. to encourage them to undertake training and look for work.

The meeting documents are available here.