The EU Affordable Housing Initiative: How can we bring it to the ground?

THE EU AFFORDABLE HOUSING INITIATIVE: HOW CAN WE BRING IT TO THE GROUND?

On January 27th, the City of Vienna organised a webinar on the “Affordable Housing Initiative” of the EU, announced by the European Commission as a cornerstone of its renovation wave strategy. Several action leaders of the Housing Partnership gave inputs. The Affordable Housing Initiative aims at revitalising 100 neighbourhoods as lighthouse projects across the EU in the coming years. About 200 participants joined the online event.

In his introduction, Director Slawomir Tokarski from the European Commission's Directorate-General for the Internal Market, Industry, Entrepreneurship and SMEs (DG GROW) gave a brief overview about the first ideas of the Commission and underlined the fact that this was the beginning of an open dialogue to shape the initiative. He welcomed the opportunity to exchange with cities and stakeholders. “We believe that the renovation wave should be a local initiative, a bottom-up up initiative that can bring jobs linked to the green and digital transitions,” he stated. He referred to the fact that for a long time, the human element had been neglected in such projects, but that there is a need to create a solid living tissue around homes to overcome the polarisation of society. The aim must be that housing in the envisaged 100 lighthouse projects needs to be affordable and resilient after renovation. He announced a call for an EU level partnership involving different stakeholders, including the local authorities, for the second quarter of 2021.

Participants then could hear two examples from the ground. In her presentation, LuciaŠtasselová, Vice-Mayor for Housing in Bratislava, explained why her city has started a strong new effort to create affordable housing in 2018. “After 1989, public apartments were sold and nearly no new affordable housing was built,” said Ms. Štasselová. “Therefore it is important to find new locations for public housing, select urban space for the city’s own construction, verify new processes and legislative procedures and  last, but not least, to use state funds for reconstruction of the existing house stock.” This will not however be possible without involving the private sector in compliance with very strict conditions with regard to housing costs and allocation rules.

Julia Girardi-Hoog from the City of Vienna then described how the Horizon2020 project “Smarter Together” aiming at creating social and technical innovations for a liveable district had been set up. The project was not only based on refurbishment and renovation of housing and public spaces, but on energy provision and use as well as mobility. 7 million euros of Horizon 2020 funding were allocated to support the innovation elements of this highly participatory project and in total, 80 million euros of investment were triggered by the project. Given the excellent results, the city decided to roll out the project scheme to one more district per year.

Two European stakeholder organisations gave first reactions and positioning to the Affordable Housing Initiative. Barbara Steenbergen, Head of liaison office to the EU of the International Union of Tenants, called for a need to combine the funding issues with the existing national rent law so that it is fair and socially balanced. “A main criterion of the initiative should be to apply strict rules to achieve housing cost neutrality.” Rent increases by renovation must be balanced by energy efficiency to avoid “renovictions” and gentrification”, said Ms. Steenbergen who also called for a “European Code of Conduct for Renovation” implementing tenants ‘participation in renovations, as the already existing European Responsible Housing Initiative ERHIN.

Sorcha Edwards, Secretary-General of Housing Europe, argued for the need to make the Green Deal a social Green Deal. “It is crucial that we get the renovation wave right and make sure that it leaves no one behind. The Affordable Housing Initiative should be a wave to bring, affordability and social inclusion to the ground. It should contribute to create jobs and small SMEs, help the local construction sector, focus on areas with social problems and make housing fit for the ageing population. It should also lead to measurable reduction of GHG emissions and employ digital advances at district levels. The initiative should also serve as a policy lab for improvements in EU policies on state aid and procurement that can support the local renovation projects. The key point, however, is financing; here, Ms. Edwards stated that a specific funding programme is necessary.

Elena Szolgayová, Housing 2030 Co-Chair and UNECE HLM Chair 2013-2019, held the closing remarks and referred to the growing gap between the poor and the rich, which leads to a situation that the question of housing becomes ever more pressing. “We need to create long-term and sustainable visions to achieve the reality of affordable housing. It is up to governments to create a long-term perspectives to support the affordability of housing, the aim should be to create a symphony with all the instruments working together to play beautiful music.”

During the meeting, participants used the chat actively to share knowledge sources about good policy examples that could contribute to the Affordable Housing Initiative.

Michaela Kauer, Director of the Brussels Liaison Office of the City of Vienna and coordinator of the EU Urban Agenda Housing Partnership closedthe webinar by expressing her hope and confidence that the event has been a successful kick-off for more discussions to shape the initiative together with a broad range of cities and stakeholders.

Read the full report and download the presentations here. 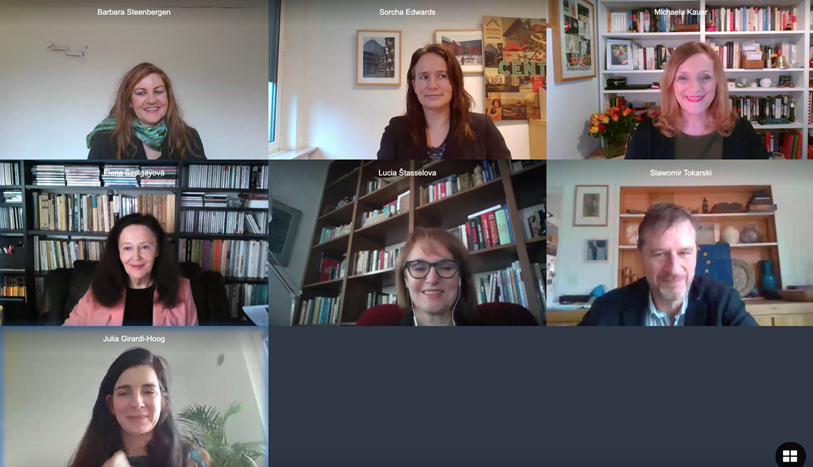