The way IoT helps to reach the Sustainable Development Goals

At the crossroads of both the European Digital Strategy and the European Green Deal, within the EU’s holistic approach to sustainable development, the Internet of Things (IoT) is already a technology enabler that drives both the digital transformation of European industry as well as sustainable growth. By focussing on key vertical sectors for promoting sustainability and innovation in healthcare, clean energy, and smart communities among others, the Commission is providing substantive support to address the challenges of digital transformation as well as the United Nation’s Sustainable Development Goals.

This CONNECT University Summer School session highlighted the views of actors from both the public and private sectors on the role of IoT systems, in the context of the Green Deal, the opportunities that could arise, the research and development perspective, and what needs to be done to ensure a smooth green transition of our economy and society. 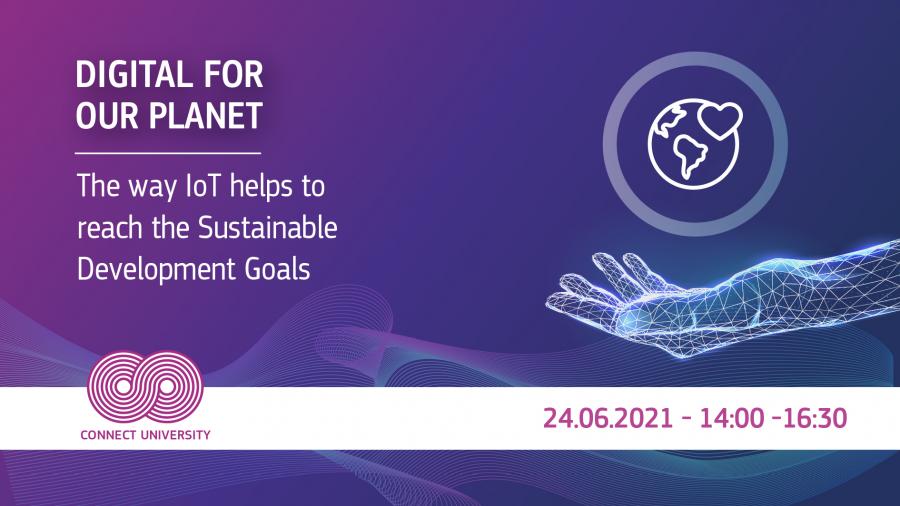 Dr. Max Lemke is Head of the Internet of Things (IoT) unit in the European Commission’s Directorate-General for Communications Networks, Content and Technology (DG CNECT). He is responsible for Horizon 2020 projects on the digital transformation of key industrial sectors, including in particular agri-food, smart energy and mobility. In the new Horizon Europe and DIGITAL programmes, he coordinates the developments on the next-generation IoT and edge computing as well as on data spaces and digital industrial platforms for these sectors.

In his previous roles at the Commission, Max Lemke played a leading role in coordinating the Digitising European Industry focus area, and was involved in the development of the European Strategy for Artificial Intelligence. He was responsible for embedded and cyber-physical systems, advanced computing, and ICT for manufacturing (Industry 4.0). He was co-responsible for the joint technology initiative ECSEL (Electronic Components and Systems for European Leadership) and the public-private partnership Factories of the Future. In the latter context, he was actively involved in the gradually building of the I4MS (ICT Innovation for Manufacturing SMEs) initiative.

Dušan Chrenek is the Principal Adviser for Energy Union Governance in Directorate General for Climate Action of the European Commission (DG CLIMA). He joined the Commission in 2007 to work as a Head of Unit for Enlargement in Directorate General for Agriculture and Rural Development (DG AGRI). Between 2012 and 2017, he served as Head of the Commission’s Representation in Slovakia. Before joining DG CLIMA, he was a Senior Expert in DG AGRI. Previously, he worked in the Policy Unit of the High Representative/Secretary-General of the Council of the EU and held a number of senior posts in the Slovak Ministry of Foreign Affairs.

Title of the presentation: The way IoT helps to reach the Sustainable Development Goals (SDGs)

Title of the presentation: IoT research and sustainable development

Dr Sébastien Ziegler is a founder and the Director general of Mandat International, a foundation promoting international cooperation and international research. He serves as President of the International Internet of Things Forum (IoT Forum) and IoT Lab, as Chair of the Europrivacy International Board of Experts, as Rapporteur on Emerging Technologies for the IoT and for smart cities at the ITU (SG20), and former Vice-Chair of the IEEE Communications Society Subcommittee on the IoT. Sébastien has a PhD in Management with a specialization in Information Systems at the Faculty of Economy and Management of the University of Geneva. He graduated in International Relations at the Graduate Institute of International Studies, followed by a Master in Environment, a MBA in international administration (HEC Geneva), and complementary executive courses at Harvard Business School in Boston, Stanford University, UC Berkeley and EPFL. He is a qualified expert in data protection for Europrivacy and ISO 27001 certifications. Sébastien founded several foundations, organizations and companies, and he initiated several international research projects in the area of ICT, with a focus on the Internet of Things, IPv6, sustainable development, and privacy. He is currently coordinating and associated to several ongoing European research projects. With a multi-disciplinary academic profile, combining international law, science, economics, and environment, he is a relentless promoter of research, innovation and international cooperation.

As one of the main architects of the UN Millennium Campaign -the predecessor of the UN SDG Action Campaign- Ms. Ponti served as Global Deputy Director and Regional Director for Europe for over a decade and was at the vanguard of innovative campaign initiatives, building multi-stakeholder coalitions, mobilizing resources and forging longterm partnerships between civil society organizations, Local Government, parliamentarians, media, the private sector and the UN. Prior, Ms. Ponti was an advocacy and resource mobilization specialist with UNICEF and the UN Secretariat. She also served as Chief Operating Officer at Catapult -a girls and women’s right crowdfunding platform and as Special Advisor on post-2015 during the final negotiations of the 2030 Agenda for the global network Social Watch. Ms. Ponti started her career with the Italian NGO Mani Tese as Head of Campaigning and External Relations, leading global campaigns and movements on debt, trade, human rights and development assistance. Ms. Ponti has published several articles for newspapers, magazines, online publications and blogs on the Millennium Development Goals, on the Sustainable Development Goals, on aid effectiveness, financial speculation, gender equality, social development, local development, debt-relief, human rights, and trade

Xavier Longan is the Lead for Partnerships and Operations in the UN SDG Action Campaign. He has served in the United Nations for over 16 years, including as Programme Specialist in Bonn (Germany) and Coordinator of the UN SDG Action Campaign in Spain. During his tenure he has brokered and managed multi-stakeholder partnerships for the MDGs and the SDGs, organized policy advocacy and massmobilization initiatives, and strategically contributed to build community engagement and knowledge networks. Prior to joining the United Nations, Xavier served as Campaign Coordinator for Eurostep in Brussels, where he supported the efforts of the Global Call to Action against Poverty (GCAP) in Europe, and as a Researcher for Europe External Policy Advisors, a think-tank also based in Brussels. Xavier Longan holds a Master’s Degree on European Institutions and Policy-Making from the University of Lancaster (UK); a Bachelor’s Degree in Politics and International Relations from the University of Lancaster (UK); and a Bachelor’s Degree in History from the University of Barcelona (Spain).

Title of the presentation: Digital for the decade of delivery

Dorothée leads the sustainable business agenda at Vodafone Group. The sustainable business team supports the delivery of Vodafone’s Purpose and its contribution to the SDGs, as well as ensuring sound responsible business practices and transparent reporting. Dorothée is also a trustee at Earthwatch Europe, an environmental charity with science at its heart. Before joining Vodafone, she spent 10 years at McKinsey & Company where she most recently was director of sustainability and social impact, overseeing the firm's responsible business practices and its contribution to society. Dorothée joined McKinsey in 2009 as head of external relations for the Sustainability and Resource Productivity Practice. Before McKinsey, she worked in politics, public affairs and communications: for the Belgian deputy prime minister, in the European Commission's spokesperson service and at a public affairs agency.

She studied literature and linguistics in Ghent, Madrid and Nijmegen and European Studies at the College of Europe. She speaks English, Dutch, French, Spanish, Italian and basic German, and loves spending time with her daughter, exploring new places, teaching and dancing.

Title of the presentation: IoT for SDGs: unleashing the potential of Industry 5.0 in the age of connected objects

Andrea Renda is a Senior Research Fellow and Head of Global Governance, Regulation, Innovation and the Digital Economy (GRID) at CEPS in Brussels. He is Professor of Digital Policy at the School of Transnational Governance of the European University Institute, in Florence (Italy). He is a non-resident Senior Fellow at Duke University’s Kenan Institute for Ethics and was Adjunct Professor of Law and Economics at Duke Law School (United States) for Academic Year 2016/2017. He is also Visiting Professor of "Competition Policy and the Digital Economy" at the College of Europe in Bruges (Belgium). He is a Fellow of the World Academy of Arts and Science, a CITI Fellow at Columbia University’s Centre for Tele-Information and a member of the European Parliament’s STOA International Advisory Board. His current research interests include regulation and policy evaluation, regulatory governance, innovation and competition policies, sustainable development, innovation policy, and the ethical and policy challenges of emerging digital technologies, in particular Artificial Intelligence. A prolific author and keynote speaker, Andrea provides regular advice to several institutions, including the European Commission, the European Parliament, the OECD, the World Bank, the Inter-American Development Bank, the International Labour Organization and several national governments. He was a member of the EU High Level Expert Group on Artificial Intelligence and is currently a member of the advisory group on Economic and Societal Impacts of Research (ESIR), for the European Commission, DG Research and Innovation.