High Performance Computing (HPC) has become an indispensable asset in the global data economy and crucial in addressing global societal challenges, including the climate change. During this CONNECT University event, the participants will get an insight into how high performance computing will power Earth system modelling and digital twins aimed, inter alia, at supporting efforts to mitigate the effects of climate change.

“Digital twins” are virtual representations of physical objects, processes or systems using real world data to create simulations that can predict how they will behave or perform, and as such have been used in industrial process for long time. The digital twins for climate action – like those that will be deployed under the new Destination Earth (“DestinE”) initiative of the EU – will be key in unlocking the potential of digital modelling of the Earth’s physical resources and related environmental phenomena on a global scale and help predict and prevent environmental degradation and disasters.

Join us in discovering in more detail how the digital twins for climate action can be used for speeding up the green transition! 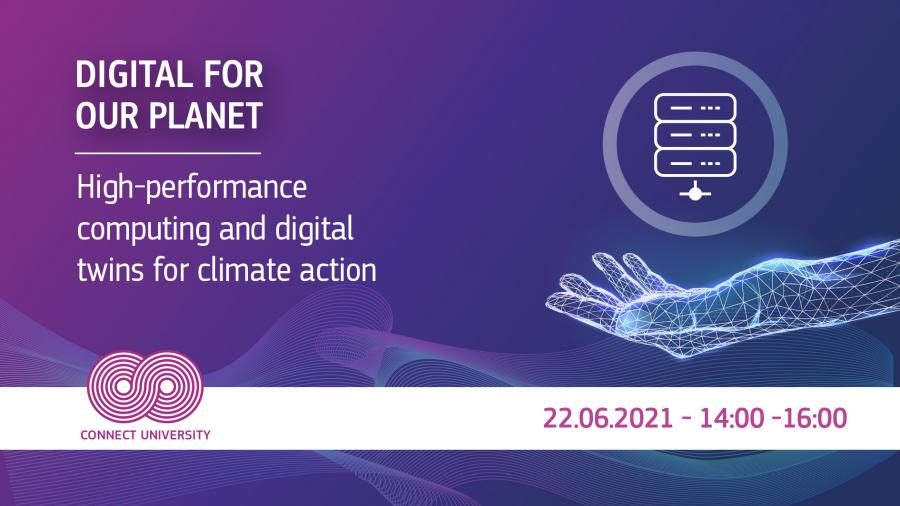 Anders Dam Jensen has a lifelong interest in supercomputers, dating from his time in university. He started his professional career with 10 years of engineering work developing computing hardware, firmware, and software for embedded systems. He pioneered IEEE802.11 wireless network technology in the nineties while working for Symbol Technologies. After a decade working with hardcore engineering and product development, Anders shifted into management as he joined Cargolux Airlines International as Director IT. Over the next decade, Anders was instrumental in the spin-off of the Cargolux IT department into CHAMP Cargosystems S.A. With Anders as CTO, CHAMP Cargosystems grew to become the largest supplier of IT services to the air cargo industry. In 2011, Anders was selected as the Director ICTM for the North Atlantic Treaty Organization (NATO), responsible for all Information and IT services as well as one of the largest classified networks in Europe. In 2020, Anders was appointed as Executive Director for the European High Performance Computing Joint Undertaking, a joint initiative between the EU, European countries and private partners to develop a World Class Supercomputing Ecosystem in Europe with a proposed budget of 8 billion euro.  Anders holds a Master of Science Degree as well as a Master of Business Administration degree from Technical University of Denmark. He is based in Luxembourg, married to Mette, and has two children.

Title of the presentation: Earth system digital twins - taking supercomputing to the next level

Peter Bauer is the Deputy Director of the Research Department at ECMWF and leads the Scalability Programme that prepares the prediction system for future high-performance computing and data handling architectures. He received a PhD in meteorology from the university of Hamburg, Germany, worked for the German Aerospace Centre in Germany and, through fellowship appointments, at NOAA and NASA in the US and CETP/IPSL in France. He leads ECMWF's contribution to Destination Earth.

Title of the presentation: Multi-facetted questions and challenges for climate projections

Pascale Braconnot is a specialist of climate modeling. She developed the first versions of the IPSL global climate model and pioneered the use of fully coupled ocean-atmosphere and vegetation simulations using the same model version as the one use for future climate projections. She has been the head of the IPSL modeling Centre from 2000 to 2008. Her activity ranges from climate model development, with a focus on ocean-atmosphere coupling and the representation of air-sea fluxes, to the use of Earth system model to understand different climate feedbacks involving ocean, ice or vegetation changes. She is co-chair of the paleoclimate modeling intercomparison project and uses past climate simulations to test the ability of climate model to reproduce climate situations different from the modern one and understand the interactions between interannual variability and long-term changes. She has been involved in Partnership for Advance Computing in Europe (PRACE) access committee.  She was on of the lead authors of the AR4 and AR5 IPCC assessments and is currently review editor for the IPCC AR6 report in the chapter dealing with the water cycle. She is also a member of the World Climate Reasearch Programm joint scientific committee.

Title of the presentation: Designing Disruption: the critical role of Virtual Twins in accelerating Sustainability

Previously, she was the founding Chief Corporate Responsibility Officer at AXA Group, where she helped the company rise to a leading position in global sustainability rankings, thanks in part to a pioneering responsible investment strategy including the landmark decision to divest from coal and, later, tobacco. Prior to joining AXA, she led the investor research arm of Vigeo(now a subsidiary of Moody’s), worked in the business consulting unit of Arthur Andersen, and acted as an independent consultant in the field of strategic planning for Save the Children USA.

Alice currently serves as a board member of ShareAction and Arvella Investments, as a lecturer at France’s EcolePolytechnique and as an advisory committee member at the Yale School of Management, the impact fund Giant Ventures, and the leading French sustainability think tank IDDRI.

Alice Steenland received her bachelor’s degree in human biology from Stanford University and an MBA from the Yale School of Management.