Climate change is the largest and most challenging problem our society faces today and dealing with it requires a new growth strategy that will transform the Union, and not only, into a modern, resource-efficient and competitive economy. Nonetheless, information about climate change is often met with climate change scepticism, denial, and contrarianism, with an overflow of disinformation on this topic being spread globally. Addressing the issue of public polarization over climate change requires acknowledging and addressing the cause. In this context, this session discussed the contribution that fact-checking, research, and media literacy initiatives can provide to support an evidence-based and future-oriented policy to counter disinformation in the EU. Watch the recording and learn why climate disinformation matter, and what can be done about it. 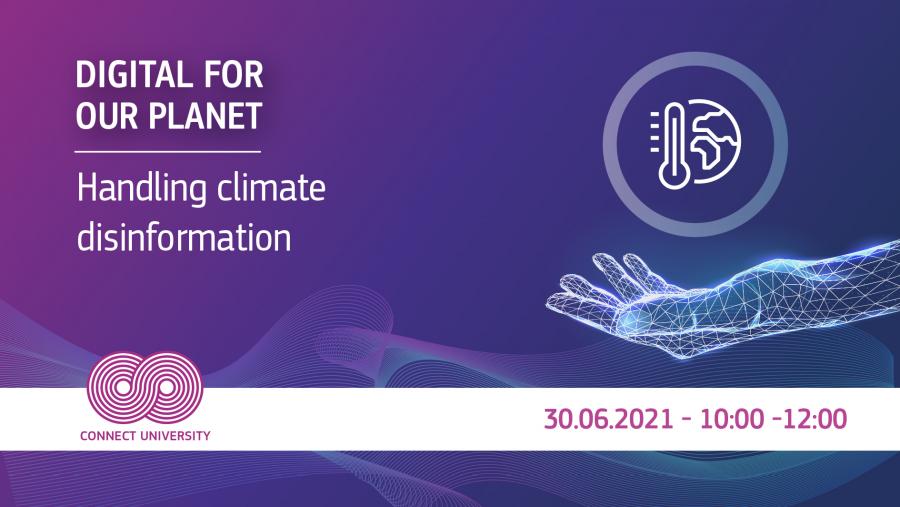 Krisztina Stump is Head of the Media Convergence and Social Media Unit, in Directorate General for Communications Networks, Content and Technology of the European Commission.

The Unit is in charge of the Commission’s policy on combatting disinformation online. It is also responsible for social media policy as well as research and innovation funding to address the challenges brought by media convergence and social media. The unit fostered the development of ‘The Code of Practice on disinformation’ in 2018 and drafted Guidance in May 2021 on how to strengthen the Code to become a more powerful instrument in fighting disinformation.

During the last ten years Krisztina has held various positions within DG CNECT of the European Commission, in particular in the fields of radio spectrum policy, audiovisual media, media freedom & pluralism and copyright. Previously, she was working at the Research Department of the Court of Justice of the European Union. Before joining the Commission in 2011, Krisztina worked at the legal department of the Hungarian Radio and Television Commission, the legal department of MTM-SBS Television and at the Andrási Law Firm in Budapest.

Krisztina holds Master of Laws degrees, with a focus on Media Law from Columbia Law School and from Humboldt University. She graduated in Law from the ELTE University in Budapest in and obtained there later also a Master's in Communication and Media Studies.

Title of the presentation: Climate change disinformation and how to combat it

Dr Lewandowsky is a cognitive scientist at the University of Bristol. His research explores these major streams:

Title of the presentation: Steps to address Climate Change Misinformation.

Spanish lawyer by the University of Zaragoza, Marisa Jiménez is specialized in EU law by the Europa Institut of Saarbruecken, Germany. Marisa has over 20 years of public policy experience; she worked for the EU Commission at the beginning of her career and held various positions at Time Warner and Deutsche Post World Net Brussels Corporate public policy offices, dealing with a variety of public policy matters focusing on Privacy and Data Protection, Internet and RFID policy related issues. Before joining Facebook, Marisa led Google’s privacy public policy strategy both in Brussels and Mountain View in California.  Marisa joined Facebook in February 2018 as Director of Public policy and Deputy Head of EU Affairs. She is based in Brussels, Belgium.

Emmanuel is a research scientist at the Sciences Po médialab where he studies web platforms’ policies against misinformation as part of the Make Our Planet Great Again program.

After completing a PhD in climate science, he founded Science Feedback: an organization that lets scientists verify the credibility of viral content in fields that are prone to misunderstandings and misinformation, mainly climate change and health. The goal of Science Feedback is to empower the scientific community to actively tackle misinformation by informing readers, providing feedback to journalists about the credibility of viral claims and helping web platforms identify and promote reliable sources of information.