Successful EU-cooperation between Italy and Slovenia in Covid19 time

On 29th February, the mayors of Gorizia (Italy) and Nova Gorica (Slovenia) Rodolfo Ziberna and Klemen Miklavič, celebrated together in Ljubljana, embracing each other, the transition to the second phase of the candidacy of Nova Gorica and Gorizia for the title of European Capital of Culture 2025 (ECOC 2025). Now, in the middle of the coronavirus emergency, they face each other daily, but at a distance. The GO!2025 Team brought them together during the inauguration of the "Virtual Cafe with GO! 2025 Nova Gorica - Gorizia" as part of the initiatives for the ECOC 2025 candidacy, coordinated by the EGTC GO. The initiative took place on April 1 in live streaming on the Facebook Page GO! 2025 Nova Gorica- Gorizia. Although the net and border controls have been temporarily restored, causing suffering and sadness, the two cities have found it spontaneous to continue collaborating and confronting each other to face a common emergency.

"The number of infected in Nova Gorica is low compared to the rest of Slovenia - explained Miklavič - also because Nova Gorica has been able to move faster thanks to the almost daily updates on the Italian situation of the friend and colleague Ziberna. The life of the two cities is deeply intertwined and this emergency situation has made us understand that it is necessary to identify a common management system to deal with such an emergency ". The data as of April 4 indicate that the entire Goriška Region is in the penultimate place in Slovenia for the number of infected (source: National Institute of public Health, NIJZ),  contrary to what everyone thought since Nova Gorica is located right on the border with Italy.

Ziberna stressed out that thanks to the role of the EGTC GO, the European Grouping of Territorial Cooperation established by Gorizia, Nova Gorica and the neighboring municipality of Sempeter -Vrtojba, the cross-border territory can give a strong signal to Europe. "The EGTC GO is Europe - told Ziberna -. We represent the promotion of a Europe of possibilities, a model of collaboration to be exported to other countries ". The two mayors agreed on considering EGTC GO as key player in the acceleration of the economic recovery and of the cross-border developement process once the emergency ends.

The ECOC 2025 candidacy has to be considered as a development opportunity for these cross-border territories, not only in the cultural sector. “Our cross-border region have got a very important and impactful tool: the EGTC, which should now concentrate above all on the economic problems of our territory. It will have to be able to channel the funds allocated by the EU for economic and developement projects, in order to accelerate the economic recovery "concluded Miklavič. 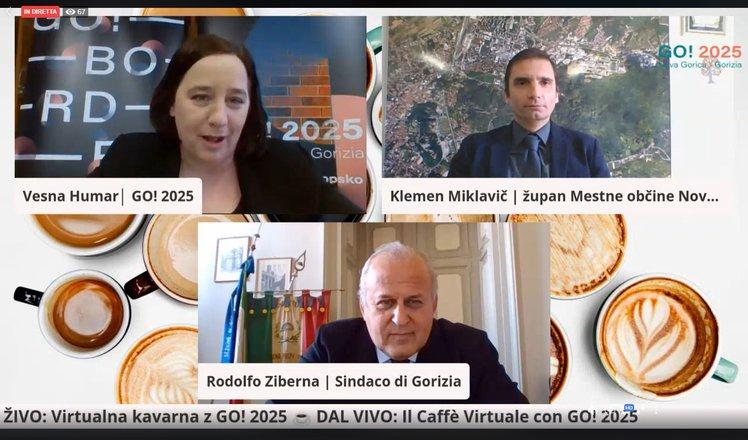 In the next weeks, the Virtual Coffee with GO! 2025 Nova Gorica - Gorizia will host other double interviews. Moreover, on 30th of March free online lessons to learn Italian and Slovenian kicked off: an EGTC GO’s initiative to make Italian and Slovenian citizens feel closer in this difficult period. The fist online lesson of both and courses gained 1300 views: a success that exceeds all expectations.