The Working Community along the Portuguese-Spanish Border: a Joint Strategic Vision for Territorial Development

The regions of Castilla y León (ES) and Norte de Portugal (PT) share similar challenges in terms of demographic trends and economic performance (with areas showing high levels of unemployment, especially among the youth population). The two regions also share almost one hundred kilometers of the Douro river which demarcates their border. These circumstances prepared the ground for establishing a cooperative framework between the two regions, which formally started in 1990 and evolved into the Treaty of Valencia. This Cross-border Cooperation Agreement is the legal instrument that currently governs the relationship between the two territories.

Since then, the relationship between the North of Portugal and the Autonomous Region of Castilla y León has been further strengthened by the creation of the Work Community in 2000. Through this institution, the regions have supported cross-border dynamics in several areas: rural and urban development, environmental protection, public services provision, and joint models for managing the Douro River and its hydrographic basin.

When looking at the objectives defined in the Strategic Cooperation Plan for 2014-2020, four priorities are identified: 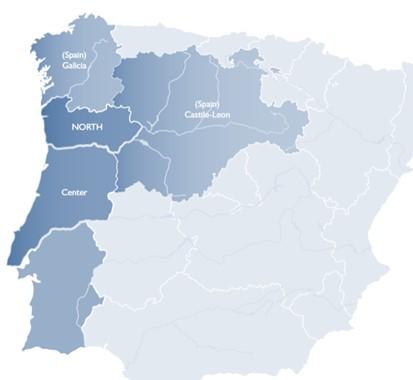 The Castilla y León-Norte de Portugal Working Community is the permanent structure for cross-border cooperation that links both territories. The Community has its own President (the Norte Portugal Regional Coordination and Development Commission - CCDR-N), Vice-President, Plenary Council, Board of Directors, secretariat, and sectoral committees. Officials from the latter in particular play an important role as they bring together political leaders and representatives of public and private bodies from both regions, and coordinate work for cross-border projects.

The implementation of the strategy is also supported by the Interreg V-A Spain-Portugal (POCTEP) programme which is considered the direct result of strong cooperation between the two regions since 1990. The programme has been an important financial source for the area with an ERDF contribution of EUR 365 million for the 2014-2020 period.

In recent years, the governments of both countries have increased their focus on territorial issues. Currently, the Community is working on the Strategic Plan for 2021-2027 which will be based upon the results achieved in the past years. The Plan will also constitute the Euroregion’s RESOE (Southeastern European Regions, which includes Castilla y León, Galicia, Asturias, Cantabria and the Portuguese regions of North and Centre) contribution to preparations for the future cross-border operational program in the sense that the projects to be supported will be aligned to the defined strategy.

More information can be found here: