Smart Delta Resources (SDR) is a cross-border and cross-sectoral partnership of large energy and resource-intensive industries in the Schelde-Delta region aiming to reduce their energy and raw material consumption through industrial symbiosis and innovation. These industrial connections not only allow economic optimisation but also contribute to the sustainable growth of local industry. SDR wants to play a pioneering role in the industrial energy transition through the ambition of making the industry climate-neutral by 2050.

The Schelde-Delta region, over Flanders (Belgium) and the Netherlands 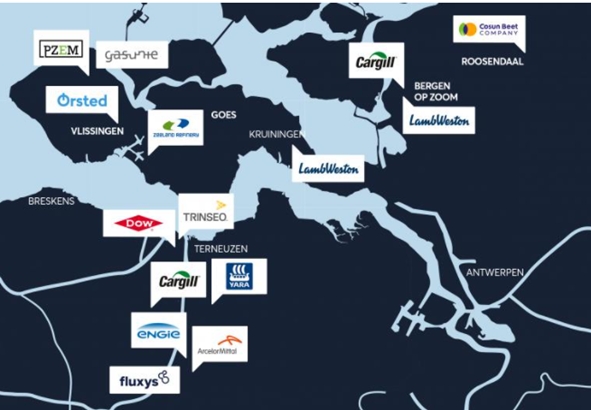 The SDR platform is a partnership between 11 companies, each of which has its own sustainability agenda and ambitions, which are reinforced through collaboration within SDR. This collaboration takes place at CEO level, where the projects are implemented within the strategic programmes and supported by specific communication and public affairs taskforces. The platform is actively supported by the Province of Zeeland and North Sea Port, while Impuls Zeeland acts as a platform facilitator by supporting investments and businesses in Zeeland. SDR has a solid foundation with a large part of the financing coming from private resources.

One of the main outputs achieved by the platform was the presentation in 2020 of the 2030-2050 regional plan describing the strategy chosen by means of four transition paths: Hydrogen Delta, Carbon Connect Delta, Spark Delta and Heat Delta.

Among the business cases developed by SDR, the symbiosis in hydrogen developed among three companies (Dow, Yara and ICL-IP) is worth mentioning. Hydrogen is a by-product of Dow’s naphtha cracker, while the companies Yara and ICL-IP need it as a resource in their production processes. The studies show that transporting the hydrogen through an underground pipeline would be a win-win situation for all the actors involved. A regional Green Deal was signed and the following achievements were attained: