QuattroPole: a cross-border network in the heart of Europe

QuattroPole is a cross-border network of 4 cities - Luxembourg, Metz, Saarbrücken and Trier - aiming at developing a common political strategy and sustainable relations among their administrations. In 2017, after the establishment of the QuattroPole association, a team of experts was commissioned to create a Roadmap Report which acts as the guidebook for cooperation within this network. The document proposes 35 concrete innovative projects to deepen cooperation in the area and to support European integration in the following fields: mobility, economy, education, culture, tourism, social policy and environment.QuattroPole also takes part in the project "Schéma de Développement Territorial de la Grande Région" (SDTGR) as an operator under the framework of the Interreg VA Grande Région programme, the objective of which was to stimulate innovation and the attractiveness of the area. 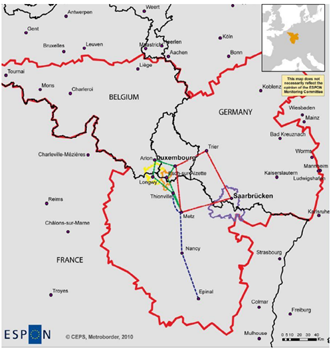 The 4 cities started cooperating in 2000 following the announcement of a declaration of intent, presented in Metz and signed by the cities’ mayors. Moreover, in order to strengthen this collaboration, in October 2014, the four mayors and 40 town councillors (ten per city) created the QuattroPole association under German law. The association is managed by the Directory, composed of the four mayors and burgomasters of the member towns and it is responsible for defining the strategic guidelines of the cooperation, supervising its finances, and conducting its annual work programme.

The 4 cities have been cooperating for 20 years now and many results have been achieved, including:

Additional information is available at: