The region of Lower Austria bundles all international and cross-border activities in the field of health under the umbrella of the "Healthacross initiative”. The initiative is part of the Health Agency of Lower Austria (NÖ Landesgesundheitsagentur), which operates and manages all 27 hospitals and around 50 care/nursing homes in the region.

All activities of the Healthacross initiative pursue one overarching goal: equal access to quality healthcare for citizens close to their home. To this day, all projects in the field of cross-border healthcare are carried out within the INTERREG funding programmes to improve the health and quality of life for citizens living in border regions.

In 2018, the WHO Europe dedicated a separate publication to Lower Austria’s efforts in cross-border healthcare, namely, “The Healthacross Initiative: How Lower Austria is boosting cross-border collaboration in health”.

Lower Austria is located in the heart of Europe, with a 414 km long border to the Czech Republic and Slovakia, and in close proximity to Hungary. The province is by size the biggest in Austria and has 1,67 million residents.  Through the “Healthacross initiative”, Lower Austria has conducted eight EU co-funded projects in cross-border healthcare since 2008, with four of them currently running as the following figure shows: 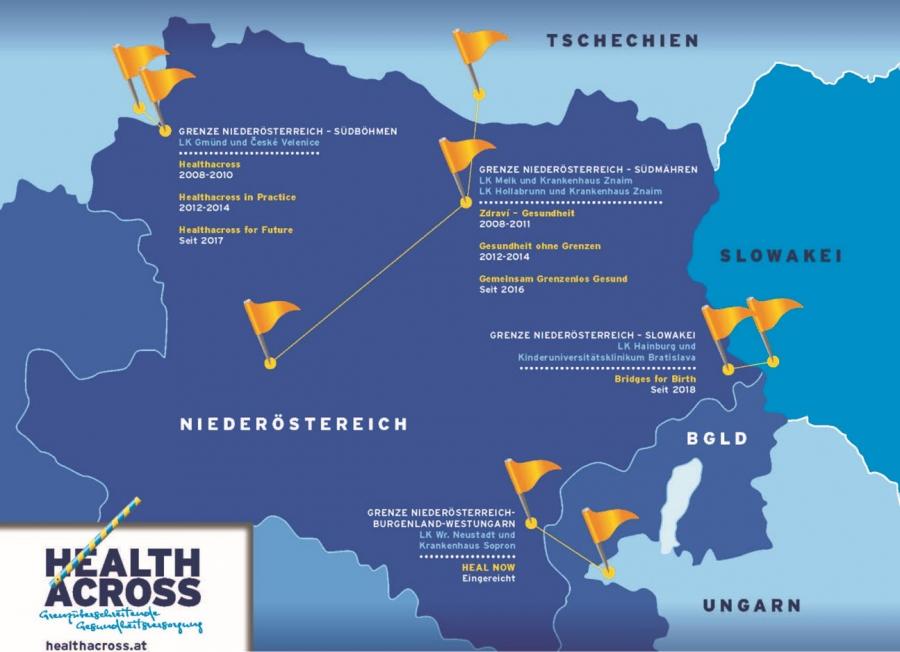 Within the framework of the INTERREG A funding programmes, various health projects have been and are carried out in Lower Austria’s border regions. Between Lower Austria and South Bohemia (CZ), in a town formerly divided by the Iron Curtain, Gmünd - České Velenice, it is now common practice for Czech citizens to receive in- and out-patient treatment in the hospital of Gmünd. The "Healthacross" project series, which serves as the name for the entire initiative, is also creating the first European cross-border healthcare centre precisely at this former border. After completion in autumn 2021, it will be possible for both Austrian and Czech doctors to treat Austrian and Czech patients there. The healthcare centre will be named “Healthacross Gesundheitszentrum Gmünd”.

With South Moravia and Vysočina (CZ), it became possible for Lower Austrians to receive radiotherapy treatment in the hospital in Znojmo, and with the help of Czech doctors, the regional hospital in Melk was developed into a level 2 endometriosis centre. In the border region between Lower Austria and Bratislava (SK), the first pilot project "Bridges for Birth" is currently being carried out.  As a result, the possibility of a neonatal transfer from the hospital of Hainburg to the Children's University Hospital Bratislava, which is only 16 km away, is being developed. Moreover, the first cross-border cooperation between Lower Austria and Western Transdanubia (HU) was launched at the beginning of 2020. Here, the hospital Wiener Neustadt and the University Hospital Erzsébet Sopron will in the future join forces in digital pathology in order to detect tumour diseases at an early stage together.

Through the “Healthacross initiative”, Lower Austria is part of four European/International networks to strengthen the regional voice in EU health policy:

Second photo is taken from ‘The Healthacross Initiative: How Lower Austria is Boosting Cross-border Collaboration in Health’ report by WHO- Photo of Melk Hospital

The benefits of such a collaborative framework were also visible in COVID-19 times; the cross-border mobility of patients and health personnel was ensured and contributed to the efficient emergency response.